QLD… How much crazier can it get?

QLD… How much crazier can it get? 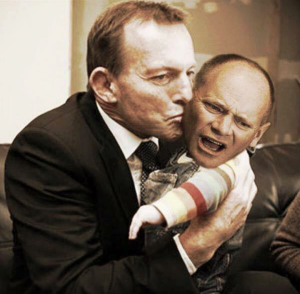 Of course that’s a rhetorical question, cos quite frankly the “Adults” are MIA at both a state and federal level, with the LNP seemingly playing politics by distraction.   😯

And the main thrust of the distraction of the last week or so is… When all else turns to shit, shoot yourself in the foot…   😯   … That’ll distract them!   😉

Like when Newman said that he couldn’t guarantee that the LNP promises to individual electorates, would be fulfilled if the LNP got back to government but the local MP’s, in said electorates, lost their seats!   WTF?   😯    That is tantamount to bribery and corruption, and makes an absolute joke of our democracy, and of any claims that he will govern for all QLD’ers!   😈

He was forced to retract/clarify that statement the next day, but his intention was made clear, in the original statement, and as the old saying goes… “You can’t unscramble an egg!”

We also saw Newman making claims of “dirty money” supporting the ALP via the CFMEU and their association with Bikies, telling journos to google it, for verification   😯   (WTF?

) which quickly turned to shit when it was reported that up to 20 bikies had made small personal donations to the LNP   😳   and although the LNP returned one donation, they were challenged by the bikies, to find the rest   😀   And  nothing more has been said about that one   😯   Who’d a thunk it?   😉

Then there was the presser where Newman refused to answer any of the 20 odd questions asked, citing that he was there to answer the questions that QLD’ers wanted answers to, about the economy and jobs… WTF?   😈   To which a few of the journos replied that they were QLD’ers,   😯   but he still refused to answer their questions, to the point where one said “well we might as well ask you about the weather, if you’re not going to answer our questions?”   🙄

The annoying thing is that there is plenty to question him about over his claims on the economy and jobs, like his dodgy figures on the economy,  and the unemployment numbers, along with his gross exaggerations and lies on law and order, and the effectiveness of his despicable “VLAD” laws, none of which were either asked or answered.   😯

He has been deliberately misleading, about the decrease in crime, as exposed by the ABC fact check, which shows a steady decline in crime over the last decade or so, and no direct correlation to his term in government, and declared his claims… “Exaggerated”?   😯

Then we saw a classic Abbott gaffe with his announcement of the “Knighting” of Prince Phil, who was effectively demoted from Prince Consort, to Knight of the colonies… WTF? 😯

There is also  the issue of the Abbott being conspicuous by his absence, during the LNP campaign, both him and Newman claiming that “he (Newman) doesn’t need anyone holding his hand”, trying to make out that it’s nothing to do with Abbott being electorally toxic.   😯   And there go those bloody flying pigs again   😉

So I come back to the original question asked… “QLD… How much crazier can it get?”

And the answer is;

The best predictor of future behaviour is past behaviour, so based on that premise…

A LOT, and all to our detriment!

Don’t be fooled by the lies spin and propaganda.   😈

Put the LNP and Murdoch last… In everything!   🙂 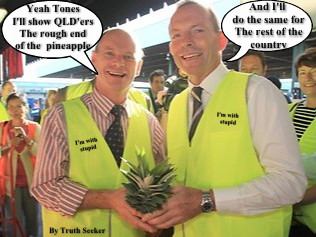 18 Responses to QLD… How much crazier can it get?

But The Shit Won't Quit

Shining through the obfuscations

A political diary for the future Generation

Examining the Abbott Government, one glass of wine at a time

A good laugh is better than a trip to the Dentist.

The only weapon worth using is truth.

SIT DOWN, HAVE A DRINK, RELAX.

Blowing the whistle on anything that blows....

You're in the right place